Portrait artist and student of the Reilly lineage, John Ennis has recently set up a blog "The Reilly Papers". This blog will focus on revealing and exploring the first hand notes of Frank J. Reilly for the first time in a public forum. I am beside myself with excitement. I encourage any and all aspiring artists of any kind to follow this blog closely. 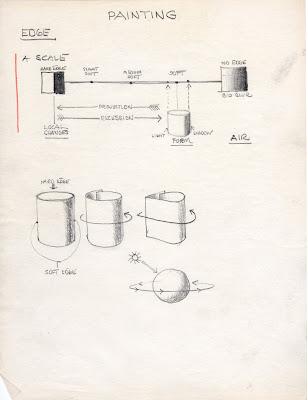 Okay so we have a bad news, good news, bad news situation.
Bad News: I spoke with Mr. Hulings' wife, and unfortunately neither of them recall the NIAD course.
Good News: Stuart Ng does in fact have a copy of the course.
Bad News: It has already been sold, and is on layaway.
If anyone out there knows who the buyer is, put them in contact with me, I could get a lot of people to pitch in on the cost in exchange for copies.
Posted by E.M. Gist at 10:37 AM No comments:

Russell Patterson and Others

Here is a screwball trailer for the movie Artists and Models including a veritable who's who of 1930's illustrators. Watch as we get to see Mr. Patterson "work" in a tux from a rotating model, mad skillz I tell ya. Also watch Rube Goldberg banter like a pro with Jack Benny
Posted by E.M. Gist at 10:53 AM No comments:

Here is a book published prior to the NIAD, but Harry Leith-Ross' lesson may have been on landscapes.
The Landscape Painter's Manual
Posted by E.M. Gist at 9:28 AM No comments:

My research has shown me that Michael Aviano covers Perspective in Art in Lesson 3, but here is a book by contributer, Simon Greco, and it is at a lesson length of 48 pages. So far all the books published in the late 60's by contributer have been around this length with the exception of Mr. Gasser's, but his book is 6 x 4 inches. Why do I have the suspicion that if that book were printed 8.5 x 11 it's 160 pages would come out to about 48?
The Art of Perspective Drawing by Simon Greco
Posted by E.M. Gist at 1:49 PM No comments:

Perhaps Henry Gasser's Lesson is on painting techniques?
published in 1964
Henry Gasser's Guide to Painting
Posted by E.M. Gist at 1:33 PM No comments:

Some help from Doug Higgins

I got in touch with Doug Higgins, former Reilly student and author of Frank Reilly School of Art. He had this to add to our Search
"Hello Mr. Gist,
Mr. Reilly used to call me into his office for a chat now and then and I remember his telling me about the correspondence course. As I recall, he said someone in the lumber business in, I think, Oregon discovered that there was money to be made in the art correspondence school business and got in touch with Mr. Reilly to put one together, which he did. I also recall that he was a little upset with Clark Hulings who, in a step by step painting, had completely changed the background in the final panel.
Many years later I became friends with Clark Hulings. We both now live in Santa Fe and he showed me his copy of the book. It was very large and very thick. I'm afraid I only spent a few moments with the book and only looked at Clark's section so there's not much more I can tell you about it. Whether it was launched or not I can't say but it did make it to final book form. I also remember that Henry Gasser was one of the artists included. Henry was my boss at the Prudential in Newark and the one who told me about Mr. Reilly's school.
You might try getting in touch with Clark but he's quite old now and in poor health.
I'm very aware of your name and what's going on at the Watts Atelier and applaud your efforts. From what I can tell, the student work is excellent, as is yours of course, and I'm sure Mr. Reilly would be proud.
Fraternally,
Doug Higgins"
I am currently trying to get in touch with Mr. Hulings, if anyone out there can help with this it would be greatly appreciated.
Also I found the author and topic of Lessons 6, 14 and 30 (see the lesson list to the right)
Posted by E.M. Gist at 1:03 PM No comments:

7.The Head, Hands, and Feet by James Bama (found)

13.Theory of Color by Gordon A. Johnson

24. a)History of Illustration by Henry Pitz
b) History of Fine Art by David Robb (found)

Values for Pictures Worth a Thousand Words by Apollo Dorian

The Frank Reilly School of Art by Doug Higgins

"The Art of Color and Design" by Maitland Graves.